I don't know about you,

but if you want to drive me CRAZY - you just got to mess with my bike while I'm away. 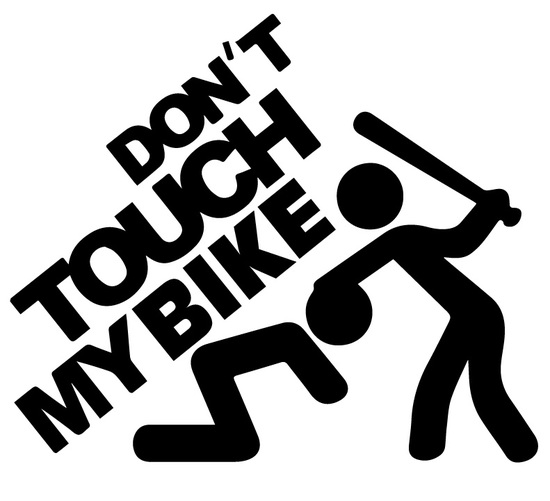 The other day I stopped to grab a quick bite. It was like 20 or 30 minute stop.

Once I stepped out, there was a guy playing with his little son, sitting him on my bike.

Yeah.. but who put him there? I felt like sitting butt-naked on the hood of his precious little car.

I was able to keep my cool and just told him to NEVER touch an unattended bike again, because not everyone would be as nice as I was.

I hope he understands that, or he'll eventually run into some SERIOUS trouble.

Love when people come up to u and say is that your bike, I say hell no it’s the guy over there

Stupid smokers. Why do they think my country is there ash tray? Have you ever been at a four way stop light and looked down at the ground and seen all the cig butts why? And better yet the other day I was on the bike. I a none smoker can smell cigs from a mile away smelt one from the car ahead of me. Sure as the day is long the lady in the passenger seat through it out of the window right at the bike not on purpose but towards me none the less. As they pulled over into a parking lot I help myself in following them into the lot. I approached the car with helmet in hand just in case the male got out. He cowardly went inside and I told her not to do that again and the next bike might not be as nice.

Need a decal like this one made ….a guy beating someone with a bat for touching my bike ….that would be cool ….have about a 4 in. square in size so we could put on bike but not look gody

Yeah worse even…….been riding since I was 5. Come out of school and mine would be gone…..they didn’t have keys….Not gonna say what happened when they returned….But, they never did it again…….small town, small school in west texas. My first key was on an 1975 AmF Harley 90, if the tail light didn’t burn , it wouldn’t run…..I carried screw driver in back pocket to school events when other schools were visiting. Those are my earliest memories of this situation……But I feel your pain….similar incident happened few weeks ago……the wife and kid were headed towards my bike as I walked out…..the husband is calling to the wife she is ignoring him……I told them the motor was HOT it may burn the kid , she left…..but in her defense the 2-3 year old kid was pulling her to it…..BTW, the motor was not HOT!…….END OF STORY.

I have had a similar circumstance. I can out from work and there was a teenage girl sitting on my bike while her boyfriend was taking a picture to post on Facebook. I was more blunt than you. I said “get the fuck off my bike !” The cartoon character for this post is it available for purchase? I would love to leave this sign on my bike while I am at work.

I came home oneday to find my back door hanging buy the top hinge and the dead bolt kinda just floating. I pushed in the bottom and crawled on in and the first think i noticed plain as day was all these little sticky candy finger prints all over my gas tank on my harley setting in my kitchen. I believe they set there kid on my bike as they helped there self to many of my tools, guns, and other stuff sad thing is im sure it was one who looked me in the face and called me friend. My home wasnt trashed they new right where everything was. Not onethink out of order.